Declan crossed the 3 lb barrier last night and weighed in at 3 lb 1 oz. This is good news and it means that he’s gaining weight. Declan was born at only 2 lb 12 oz.  (His sister was double that at 5 lb 8 oz.)  Getting past 3 lbs feels like progress to us. Although it’s important to note that, at this scale, weights can fluctuate a lot over even just a bowel movement. It’s also important to mention that right now he’s mostly getting nourishment from an IV. 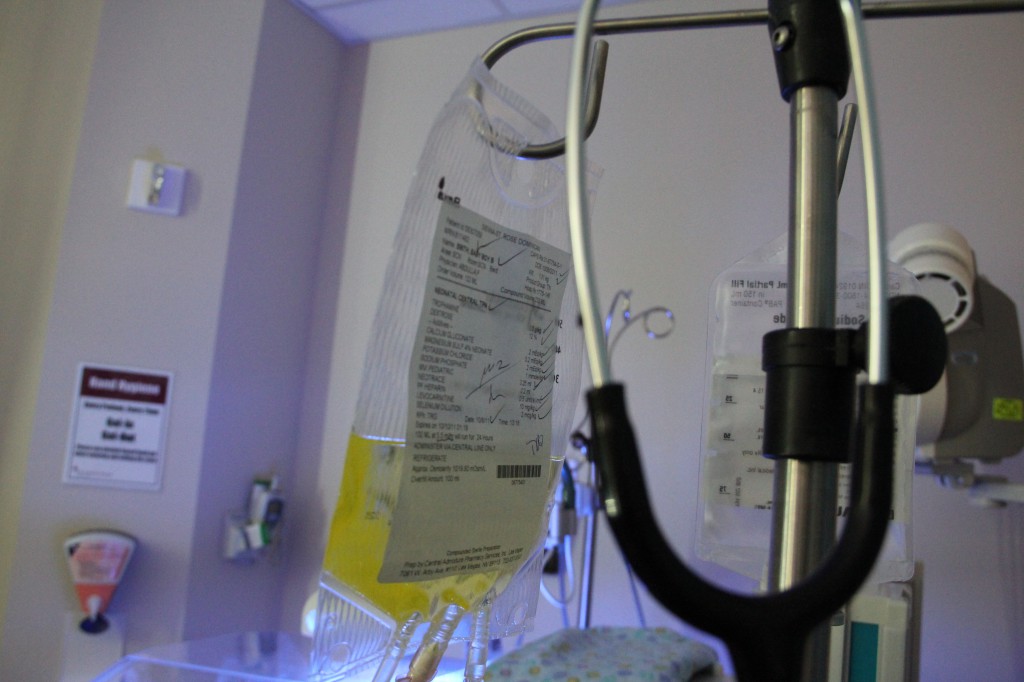 Each day a cocktail of Lipids (fats), Sugars, Electrolytes, etc. is formulated just for Declan. This mixture is custom made to his needs based on his daily labs. The IV gives him what he needs to fatten up, and last night we saw that it’s working. But this is just a first step. Eventually, he will be able to gain weight without the IV. 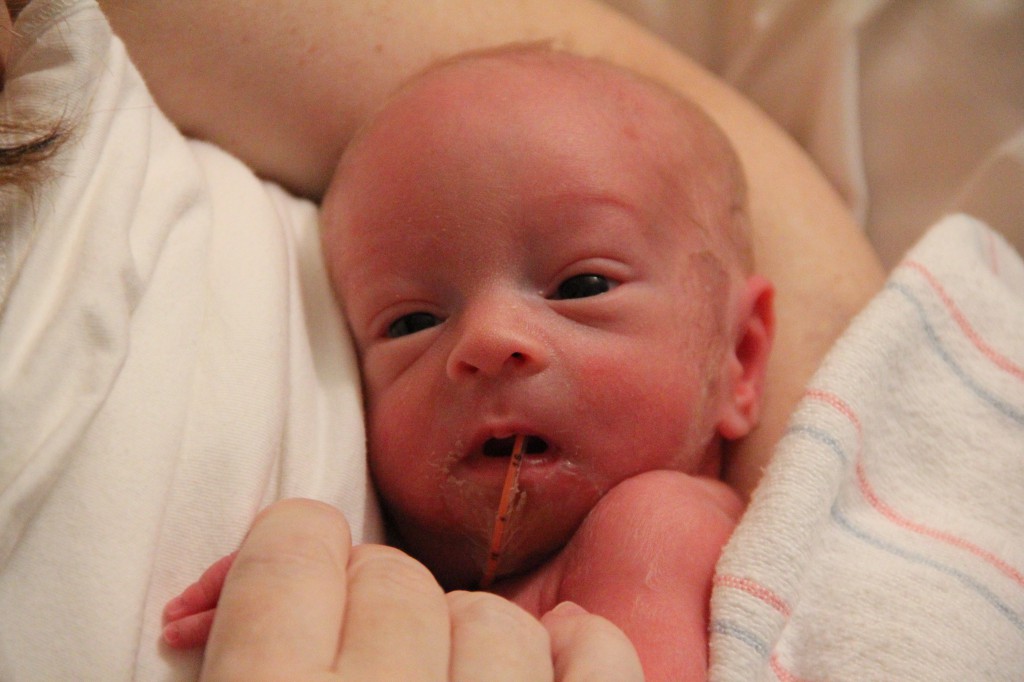 A small tube is used for feeding and examining stomach contents.

Declan is also being fed mother’s milk. You may have noticed that, in some of the photos, he has a tube in his mouth. The tube serves several functions. Early on it was used to remove any air that was in his stomach. But now nurses use it to push a few mL of milk or formula directly into his stomach. At the following feeding they pull the remaining contents out to examine to see how much he digested and whether or not the milk has spoiled. Then, they usually put it back in and sometimes will add more to it. While this might sound traumatic, I’ve seen it done many times and it’s not. It gives the nurses and doctors a way to see exactly how well he is processing food on his own. Generally, preterm babies born before 34 weeks are not ready to process foods. And Declan wasn’t ready at first either. But now he’s processing about 2mL every 3 hours. Which, again, is progress over the previous day’s numbers of 2mL every 4 hours. Or the day before that, when he was taking 1mL every 7 hours. 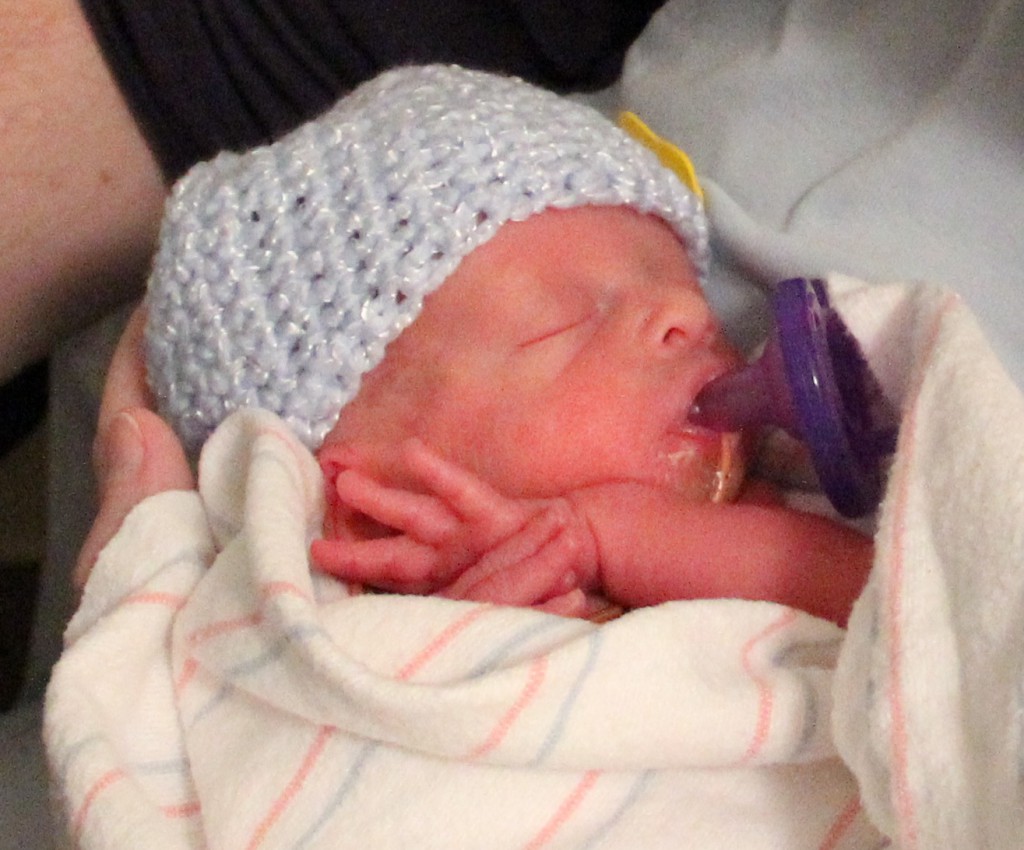 Declan practices with a pacifier.

The goal is for Declan to start nippling his food instead of taking it via the tube. He’s already getting practice by sucking on a pacifier. But eating from a bottle requires a suck-swallow-breath combination, where a pacifier is only the sucking part. When Darcy started taking food via the bottle, she was eating like a premie, which means that she wasn’t doing the breathing part. But she is now eating like a champ. Declan will get there over time and via slow and carefully monitored progress.

For Declan, when he starts on a bottle it will still be supplemented via the feeding tube and the IV. Then, like with Darcy, he will be weaned off each of those. But today even Darcy, while she’s eating like a champ, still has a feeding tube as an emergency backup. I guess what I’m saying is that it’s a gradual progress. But we’ll get there.

Declan has been a little elusive. For the first few days we were really only able to touch him through the sides of the Giraffe. It was a rare treat when the top of the Giraffe was opened and we could see him directly instead of through plexiglass.  Darcy got most of the attention and we were able to do her “cares” – take her temperature, change her diaper, and eventually hold and feed her. But yesterday after Shannon finished her transfusion at around 3am we went in for cares and after feeding Darcy the nurse asked if we wanted to hold Declan. This was the first time that he had been held by either of us. 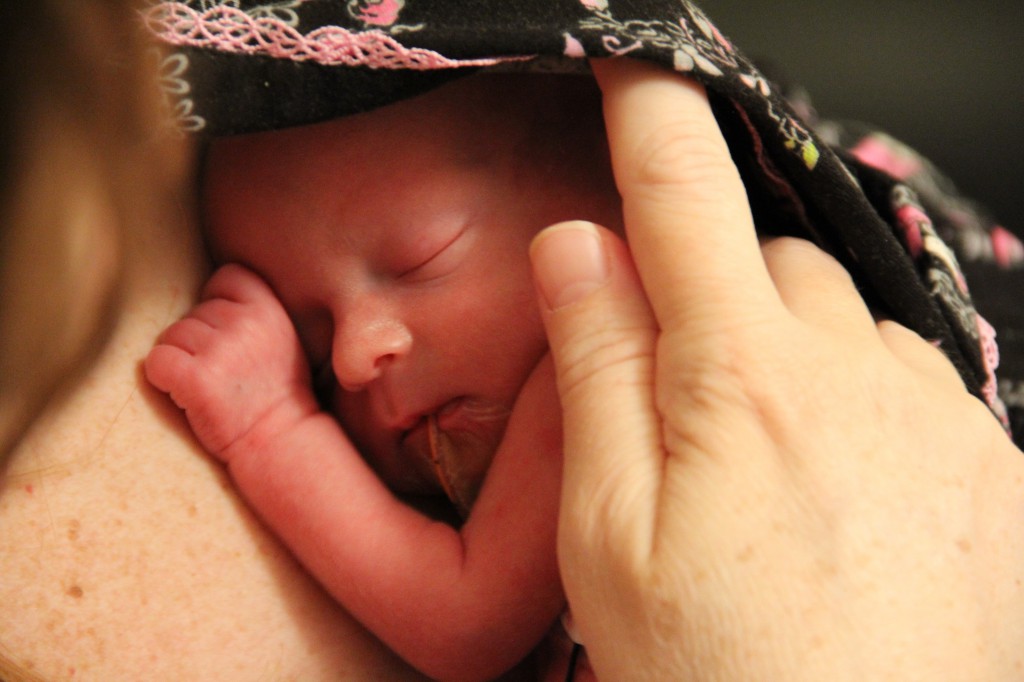 Kangaroo Care is holding the preterm baby skin to skin.

When we first took the tour of the NICU they mentioned Kangaroo Care and that they recommended that both Shannon and I do skin to skin cuddling sessions with them. So let me get this straight… you want me to come in here and take my shirt off or unbutton it and hold the baby on my chest..? Here? I thought it was silly. But the other night when Shannon held Declan for the first time against her skin I have to say that he was noticeably at peace. I mentioned it in the other post and of course picked a photo where he appeared to be smiling. But I was honestly surprised at how much he responded to it. He was in heaven!

Personally, I believe that it might be one of the reasons he had a little milestone of advancement the next day.