Michael and I got married when we were in our 30’s. We hoped to start a family after our first anniversary. (Michael Edit- I don’t remember that but ‘okay’.) Not surprisingly, it didn’t happen for us over night. After a few years with out a single pregnancy, we started exploring other options and ultimately made a decision to adopt from China. However, God had another plan. We literally received the adoption application the night before I woke up with the suspicion that I might be pregnant. A pregnancy test confirmed my intuition and Gillian was born later that year- 2 months shy of our 4th wedding anniversary.

We hoped that Gillian would have siblings but tried to just let nature take its course.  Well, I suppose that’s exactly what it did. It’s natural for women over 35 to have fertility issues. It’s hard to say exactly why we didn’t go to see a specialist after a year or two. I do remember thinking that learning that we had some problem would just stress us out and make it impossible to conceive.

(Michael Edit – I think maybe I thought that anything fertility would cost a lot of money or something, but it wasn’t anything that I considered until right before we did it.  On having more children: from my perspective..  In more recent years, I think we had both wavered between wanting more and feeling that our family was complete.  I would say that I was flexible on it.  While I was fine with just one kid, I was also fine with more if it was what Shannon wanted.  But I never really wanted two more.)

(Shannon Edit- Do not be fooled folks, it was Michael who first suggested that we try for twins. He was the one who ultimately talked me in to it.)

We returned to the prospect of adopting. However, we both held on to the idea of having more children so we weren’t terribly proactive on any front. Months would go by and I wouldn’t do anything but hope that I’d just get pregnant. After another 4 years, we started having a lot of discussions about potential options. I did a lot of research in to domestic and international adoption. I also mentioned our interest to a few friends, in case they learned of someone wanting to place a child for adoption.

We really thought we’d go the international adoption route but we found out that we’d aged out of most of the programs.

Last summer, Michael reconnected with a former business colleague and learned that her room mate was a professional surrogate. The idea of surrogacy really appealed to him as I’d had complications in pregnancy with Gillian and that scared both of us. I started to research surrogacy. I learned that it was a cottage industry at among many young married woman at Camp Pendleton. I also learned that it was most affordable in India. I spoke with a grade school friend who has her child via an altruistic surrogate and then thought long and hard about friends who might be willing to carry my child. While, I could think of several who would be willing- I just got depressed when I realized my peers were also all of “advanced maternal age” and not ideal candidates. I think that the surrogacy issue that was most problematic for me was legal implications. We’d have to work with a lawyer to protect ourselves from the surrogate keeping our child or suing us for medical complications.  I didn’t want lawyers involved in the birth of my child.

Michael and I began discussing the idea of traditional IVF. For surrogacy, the plan would have been to retrieve my eggs. I proposed that as long as we were going to explore this option, we should run full diagnostics to see whether I could carry another child to term. It took us a few days to get used to that idea but then we started taking action. Once Michael and I get an idea in our heads, it’s usually full steam ahead and this was no exception.

We knew some friends at church who were pregnant thanks to IVF and donated embryos. I reached out to my girlfriend and set a Starbucks date to talk through Assisted Reproduction options. She was so thorough and open. Our discussion left me feeling confident and encouraged that we were headed down the right path. She referred me to her doctor and I set an appointment for the following week.

Michael and I both really liked the office and the doctor in particular. He is an expert in his field and also extremely warm and genuine. We were able to take as much time as we needed for our initial consultation and he gave us much to think about. The most significant things we learned from the appointment were that since I’d given birth to Gillian and had no known miscarriages, I could likely carry to term. He recommended this over surrogacy because I would have genetic influence on the children. Second, at my age, my eggs were most likely the cause for our infertility. I would likely have very few and of those remaining, many would be malformed. If we would consider donor eggs, we could increase our odds of successful outcome from 40-50% to 80-90%.

We scheduled our diagnostics and left the office all a flutter. Even before we’d finished our diagnostics, we turned our focus to the merits of donor eggs versus using my own. Could I let go of the ideal of trying to have more babies with my own DNA in favor of greatly increasing our odds for success? Could we risk a failed IVF cycle with my eggs and be left with out the funds to try again? The decision was made a bit easier once we completed diagnostics. My ovarian reserve was not optimum. We could try with my eggs but we would be taking a big risk. Michael and I both decided that we didn’t care whether our children had my DNA. We had planned to adopt previously – and that child wouldn’t have any DNA relationship to us – and we had been fine with that. But in this case, the babies would have Gillian and Michael’s DNA and my genetic influence. They would still be knit together in their mother’s womb. We decided to proceed with this option.

When we had our follow up consult we told the doctor that we planned to use donor eggs. He reiterated that we could use my own but he also encouraged us  and expressed that we’d made a wise decision. He took my photograph and sent it to the donor coordinator. We scheduled an appointment to meet with her the next day.

(Michael Edit – I want to point out that the Doctor did not push us towards using a donor. In fact quite, the opposite. He was very supportive that it was possible for us to have another child using Shannon’s eggs. A lot of thought, prayer and deliberation went in to the decision to use a donor. And very early on Shannon and I both knew that we made the right decision.)

When we met the donor coordinator, she was really excited to show us a picture of a candidate that she’d just interviewed. The woman bore a striking resemblance to me mostly owing to having very similar bone structure. We also saw a picture of her as a baby- which was almost identical to a baby picture of me. As an adult, she didn’t look like my twin. There were major differences in her smile, body shape and height, all of which we quickly dismissed. The coordinator asked us what we wanted in a donor and we weren’t really sure. We knew that we wanted some resemblance hoping that we wouldn’t be plagued with dumb questions down the road. We didn’t think about more important considerations for donor selection.  We looked through a few photos of other candidates and read a few profiles but decided right in the office to proceed with the first candidate. The coordinator contacted her to come in and start her paperwork for the screening process.

The next day, the coordinator called us back with more information that she gleaned from our candidates profile. She had a few problems with her family medical history. We did a bit of probing and decided that we were still comfortable proceeding with her. Soon thereafter, I started second guessing our choice. Suddenly, I was crystal clear about what was important. Obviously, medical history should trump appearance. Secondly, a prior, successful IVF donor cycle that resulted in live birth should be considered. I was rather sick about our own short sightedness but it all worked out.

In the midst of my contemplation, we received the call that our candidate was screened out of program. We were filled with mixed emotions at the news. I felt that we’d dodged a bullet that might have come from a hasty decision and began to question whether I was being too pragmatic about the overall decision to use donor eggs. Was I so driven by statistics that I’d failed to search my heart? Is it even appropriate for a Christian to use Assisted Reproductive Services- more over donor eggs- to build a family? Were we playing God?

I emailed our doctor to revisit the discussion and my diagnostics. Michael and prayed. The next morning, my daily Bible reading was in Luke chapter 1. I read of the birth of John the Baptist and the foretelling of Christ’s birth.

I was so humbled by God’s perfect timing with this scripture. It wasn’t random that it was served up for my daily reading. I felt encouraged on two fronts: 1) I was reminded that Elizabeth was barren and that she and Zacharias were in advanced years and  2) Mary’s conception of Christ is a pretty clear example that God supports unconventional family plans.

Our doctor phoned me that evening and we had a great discussion. He reassured me that we could choose either course. I already felt confirmation that donor was right for us.

When we met with the coordinator a second time, we looked at more pictures and profiles. We chose a candidate who came from an extremely healthy family. She didn’t look as much like me but had similar hair color and complexion. She also had some similar ancestry. We got to see pictures of her and her brother as children and also pictures of her parents.  The most compelling reason for the selection was that she’d had two prior successful IVF donor cycles. And I’m not going to lie: the second most compelling reason for the selection was probably the fact that she has the most fabulous hair.

Michael Edit – I wanted to honestly weigh in on the donor selection process. First, I loved our coordinator. She was and is direct, understanding, and reasonable. And she has a great personality – she is one of those people you just want to be friends with. I strongly considered naming one of the kids after her – she also has a cool name. But even better than any of that, she knew the deal. Let’s face it: it’s sort of an awkward decision. And it’s an extremely complex decision. Every person who faces that decision probably has different priorities. Our coordinator’s attitude towards the process made things so much easier. Because we didn’t have to ask any awkward questions, she did that. There’s no guilt in favoring appearances or similarities to family traits or the use of any other screening methods. The simple fact is that appearance is going to be a huge factor in selecting a donor. If all other things are equal, you’re going to pick a donor with good genes: both from a family history / health perspective, and appearances. And I believe that we picked a really great donor on all fronts. 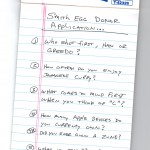 1 thought on “Starbucks and Scrambled Eggs”